I can rest easily at night, knowing menacing Barry Bonds is off the streets

Home » Category 1 » I can rest easily at night, knowing menacing Barry Bonds is off the streets 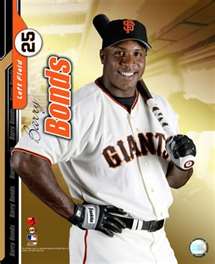 I feel so much safer that Federal Authorities are spending boat loads of tax payers’ dollars getting bad guys off the street and keeping our children safe at their schools by … prosecuting retired baseball star Barry Bonds.  Are you kidding me?  Ah, but remember, this case isn’t about Bonds.  This case is about putting certain Federal Investigators and Prosecutors on the fast track of a promotion.  Federal Authorities aggressively pursue criminal investigations and prosecutions against a class of persons described as “celebrity” subjects.  These people are typically politicians, elected officials, high ranking government officials, public safety employees like police officers, and true celebrities like professional athletes and movie stars.
Federal prosecutors with a great deal of latitude in selecting cases the wish to prosecute through the Federal Courts.  U.S. Attorney’s office, the FBI no budgetary limitations, especially when compared to with their State and County counterparts. And it is important to note, that the Government isn’t prosecuting Bonds for taking performance enhancing drugs.  Why not?  Because it probably wasn’t a crime and if it was, it would be a minor infraction.  No, the Government is prosecuting Bonds for obstruction of justice and perjury which are charges that carry far greater penalties than any underlying  allegation.

Overcoming USCIS Delays When you file any documents with the USCIS, USCIS will generally provide you with a “processing time” for the type of application or petition you have filed. USCIS may change these processing times arbitrarily depending on the number of applications they have received, but there is a regulatory timeframe within which USCIS ..

Managing the Adverse Impact on PEPRA Employees The Public Employee Pension Reform Act of 2013 (PEPRA) was intended to stop the increasing costs of the pension system. However, CalPERS and many other 37 Act pension systems changed the way they amortized unfunded liabilities with annual escalation to employer contributions until they hit their peak in ..

PORAC LDF Rolls Out Plan VI Coverage Details As you are aware, the passing and subsequent signing into law of Senate Bill 2 (SB 2) in California brought about several big changes for peace officers to be aware of, not least of which being the establishment of a decertification procedure. SB 2 amends Penal Code ..

PORAC LDF Rolls Out Plan VI Coverage Details As you are aware, the passing and subsequent signin...